Celebrating Pride online and outside!

Arcade Comedy Theater values queer voices. On our stages, in our classes, and working here behind the scenes. In honor of Pride Month, we are shining a bigger spotlight on the amazing comedic artists in the LGBTQIA+ community. Productions listed on this page are produced by or star queer artists from all over the Pittsburgh comedy community — this year, we are presenting shows online and at outside venues.

Arcade strives to be an inclusive and welcoming space for everyone, as it’s the only way to truly elevate and advance the art of comedy. Laughs for all!

ON DEMAND
Available all of June 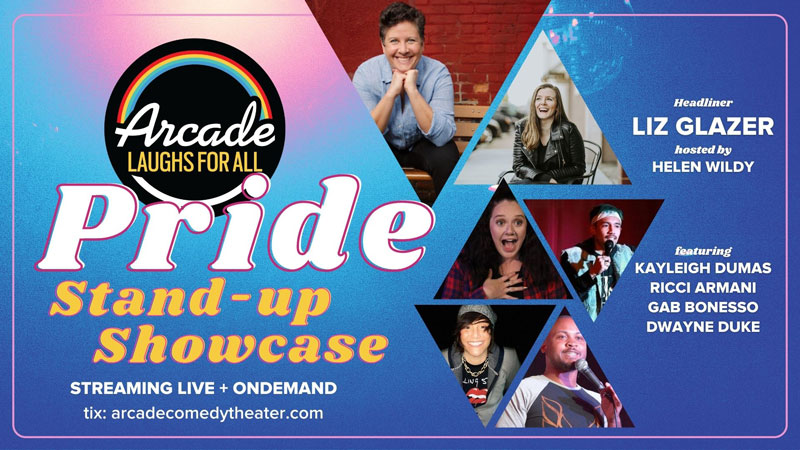 If you missed the live stream of the Pride Comedy Showcase, we’re making it available all month long! Purchase a “select your price” ticket to watch the recording of the show on demand. Proceeds benefit Arcade Comedy Theater and the performers.

ARCADE AT THE OASIS
Sunday, June 20

Arcade Comedy Theater and Donatella present a queer improv jam — the city’s first improv comedy jam since March 2020. Featuring short form improv from performers from around the city. Interested in playing? Performers are encouraged to sign up in advance with this form.

Tickets: $10 per person
LGBTQ+ Performers: improvisers participating in the jam get free admission and need not reserve a ticket

9PM: Not So Straight Comedy Show

Tickets: $15 per person
Learn more about Arcade at the Oasis

ARCADE AT THE OASIS
Sunday, June 27

Arcade Comedy Theater and Donatella present an online queer improv jam! Featuring LGBTQ+ performers from Pittsburgh and beyond, this free improv jam is for performer’s only. Registration coming soon. 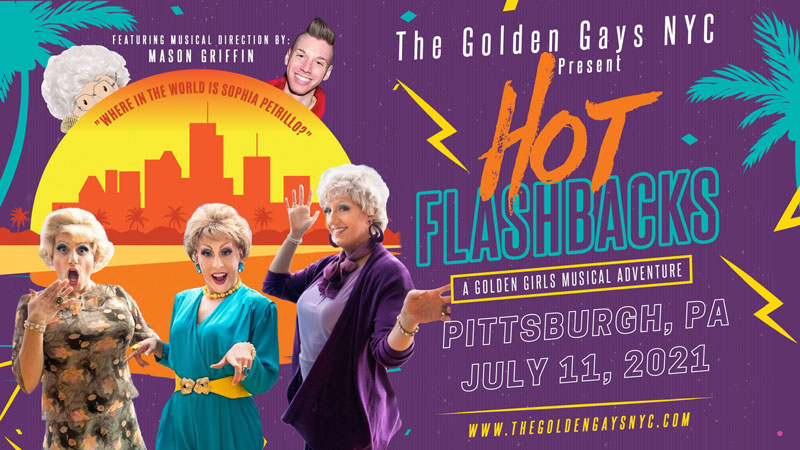 Sophia Petrillo has gone missing!  Your favorite pals and confidants Dorothy, Blanche, and Rose must travel down the road and back again across America to find her.  Could she be at the Rusty Anchor?  Or right in their kitchen on Richmond Street?  Through a series of hilarious “hot flashbacks”, these hip old grannies take you on a musical journey through The Golden Girls’ most memorable moments to find their Ma!  One lucky audience member will be crowned the next #TokenSophia.  Live singing!  Dancing!  Bears!  Oh My!

About the Allegheny Overlook Stage

Arcade Comedy Theater is partnering with the Pittsburgh Downtown Partnership to present live comedy on their pop-up Allegheny Overlook Stage, located on Ft. Duquesne Blvd between Stanwix and Sixth St. Food and adult beverages will be available for purchase.

This venue is operated by the Downtown Partnership, and Arcade Comedy Theater will be enforcing all current COVID-19 safety guidelines as outlined by the Allegheny Health Department and the CDC.

Today you can find There: Ultra Lounge, 941 Saloon and after-hours club Tilden (linked to House of Tilden, one of Pittsburgh’s oldest gay clubs from the 70’s owned by Robert ‘Lucky’ Jones who ran the majority of gay friendly establishments in his time). But this tradition has been going on for a while. Pegasus shuttered its doors in 2009 but had been staple of the scene since Pittsburgh struck down its sodomy laws with Commonwealth vs Bonadio in 1980. Stretching back a little bit further and you also find the Venture Inn at 923 Liberty. And while it may have been more for straight people trying to get a “rub & tug,” The Aardvark Studio II at 943 Liberty Avenue was a known illegal massage parlor in the 70’s and 80’s owned by Dante “Tex” Gill, born Lois Jean Gill. Dante much preferred to be called “Mr. Gill,” dressed in men’s clothes, and was married to a Cynthia Bruno. A transgender business owner in downtown Pittsburgh, even if he was on the shady side of the law.

Mr. Gill is gone, so is Pegasus, and Pride found its way to the Andy Warhol Bridge, but that doesn’t mean Liberty Avenue has gotten any less gay. Right where Aardvark Studio stood, Arcade Comedy Theater has been a home for queer comedians of every stripe of the Pride Flag. From the very beginning the comedy theater has made sure to show how inclusive they can be, forming an all queer pick-up improv team, LGTBQ*Bert, in 2013. Cast with only five members at the time, the kaleidoscope of comedians eventually reached the heights of nearly 30 performers. When not performing at The ArGAYde Comedy Show, or their own self-titled shows, members of LGTBQ*Bert are on several house teams at the theater and even work as front end staff. But that’s not the only show to regularly find itself on Arcade’s stages. Since 2015, Arcade has hosted the sell-out Golden Girls Live! where queer male actors portray the titular foursome in live readings of classic episodes. 2018 marked the first year Arcade had a monthly drag show, produced and performed by local Schwa de Vivre. And Donatella began an all-queer variety show to bring in performers that fit outside the regular improv and stand-up boxes.

With its pursuit to bring Laughs for All, Arcade Comedy Theater (and Liberty Ave) can only get gayer.